What is graphite used for?
Most of the demand for graphite in recent years can be attributed to the steel and automotive industries where it plays a key role in the construction of crucibles, gaskets, brake pads and other vehicular parts. It's also a major component of lubricants, plastic reinforcements and electric motors and while its use in these sectors is not expected to decline in the foreseeable future, its use in batteries, energy storage and renewable power is expected to drive the demand for graphite to new levels in the coming years

The Lithium Ion Battery Connection
Lithium ion batteries require as much as 20 to 30 times more graphite than they do lithium to manufacture and with early predictions estimating that 64 percent of all U.S. cars will be electric by 2030, substantial quantities of graphite will be critical. Vandium redox batteries are also heavily dependant on graphite and are being used to provide storage from renewable energy sources such as wind and solar. As much as 300 kg (kilograms) of graphite is needed for every 1 MWh (megawatt hour) produced. 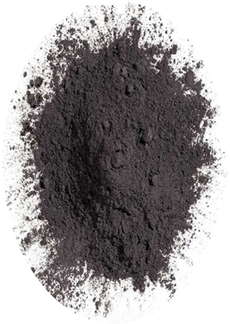 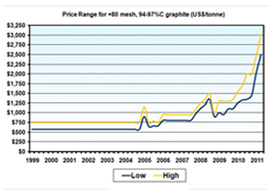 The China Connection
Due to the fact that China contributes to roughly 80 percent of the global market for graphite, a great deal of concern has been raised over export policies that threaten to disrupt availability of the mineral. China has instituted an export licensing system and imposed an export duty in order to ensure an adequate supply of graphite to its domestic economy. As a result, prices have steadily risen and many countries have looked to obtain graphite from other sources. The United States and Europe have both listed graphite as a supply critical material and its price and availability will continue to play an important role in the global mineral market for years to come.

The Nuclear Connection
Graphite in Pebble Bed Nuclear Reactors
A Pebble Bed Nuclear Reactor (“PBMR”) is a small, modular nuclear reactor.  The fuel is uranium imbedded in graphite balls the size of tennis balls.  PBMRs have a number of advantages over large traditional reactors in addition to their lower capital and operating costs.  First, they use an inert gases rather than water as a coolant. Therefore, they do not need the large, complex water cooling systems of conventional reactors and the inert gases do not dissolve and carry contaminants. Second, its passive safety removes the need for redundant active safety systems.  In other words, a PBMR cools naturally when is shut down.  Finally, PBMRs operate at higher temperatures which makes more efficient use of fuel and they can directly heat fluids for low pressure gas turbines. The first prototype is operating in China and the country has firm plans to build 30 by 2020.  China ultimately plans to build up to 300 gigawatts of reactors and PBMRs are a major part of the strategy.  Small, modular reactors are also very attractive to small population centers or large and especially remote industrial applications. Researchers at West Virginia University estimate that 500 new 100 GW pebble reactors will be installed in the US by 2020 with an estimated graphite requirement of 400,000 tonnes.  This alone is equal to the world’s current annual production of flake graphite without taking into account PBMR demand from the rest of the world, growing industrial demand and growing demand from other applications such as Li ion batteries. 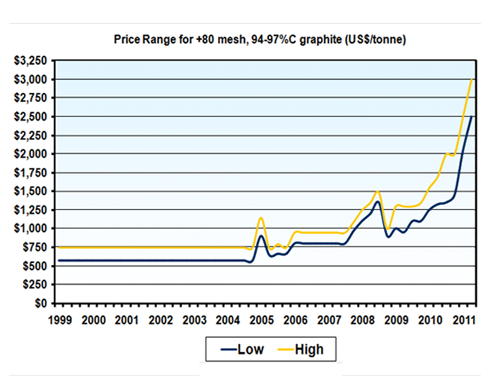 Graphite Prices have almost tripled since 2005 due to Industrialization of BRIC countries (Brazil, Russia, India, China) Contined strong demand from traditional steel and automotive markets. Annual graphite demand is expected to increase by +50% from 1.1 million tonnes to 1.5 million tonnes by 2020 based on the steel market alone.

New applications such as lithium-ion batteries, fuel cells and nuclear power have the potential to create significant, incremental demand growth in the future. For example, it takes as much as 30 times more graphite than lithium to make lithium-ion batteries. The use of li-ion batteries is growing rapidly in consumer electronics, they are now becoming popular in power tools and motor scooters, and growth will continue with the increased use of hybrid and all electric vehicles.

Demand from batteries and high-tech applications are projected to be dramatic. Lithium-ion batteries are projected to more than double the demand for graphite to about 2.6 million tonnes by 2020. Industry analysts predict the discovery of Graphene will be a major driver of Graphite demand. Chinese graphite is declining in quality and costs are increasing due to the effects of high grading and to tightening labor and environmental standards. China has now instituted export duties and licenses and the largest Chinese graphite producer has publicly asked for "Rare Earth" type protection. China has announced its intention to create monopoly in the amorphous graphite market which increases the probability it will do something similar in the higher value flake market.